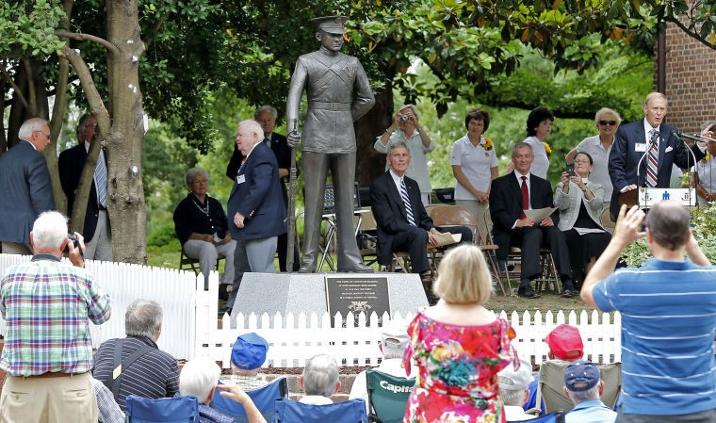 To view a video of the Cadet Statue Dedication at the John Marshall House, go HERE.

From the Richmond Times-Dispatch, Monday June 3, 2013
By Carol Hazard

Patriotism was on full display Sunday afternoon at the unveiling of a 6-foot bronze statue of a cadet in dress uniform on the lawn of the John Marshall House in Richmond.

“Chief Justice John Marshall would be proud of what we are doing here today,” said Richard Barrett, president of the John Marshall Corps of Cadets alumni.

“Duty, honor and country is our motto of the corps,” Barrett said to a gray-haired crowd of about 175 John Marshall High School graduates and their families, including a retired U.S. Air Force colonel, Class of 1938, from Colorado Springs, Colo.

“Dedicated to the thousands of young men who wore the uniform of the Corps of Cadets,” states the inscription at the base of the statue.

Established in 1915 at John Marshall High School, the Corps of Cadets was the first military training program in a public school in Virginia. Some 8,000 boys joined the program between its founding and 1971, when the corps was disbanded during the anti-military Vietnam War era.

“The John Marshall Corps of Cadets built a lot of character in many young men,” said Aubrey Davis, a 1955 graduate who served in the Air Force for four years, a prosecutor for 32 years and commonwealth’s attorney in Richmond for 18 years.

“With this statue, we continue the tradition,” said Major Gen. Dick Collier (Ret.), who went to Virginia Military Institute and served 35 years in the Army after graduating from John Marshall High School in 1953.

“This cadet stands guard over the home of Chief Justice John Marshall,” the inscription says. “From 1909-1960, John Marshall High School proudly stood next to this national landmark.”

About 28 cadet corps alumni band members, including a 1942 graduate on the trumpet, played the “Star Spangled Banner,” “Onward Christian Soldiers” and other familiar, uplifting tunes. 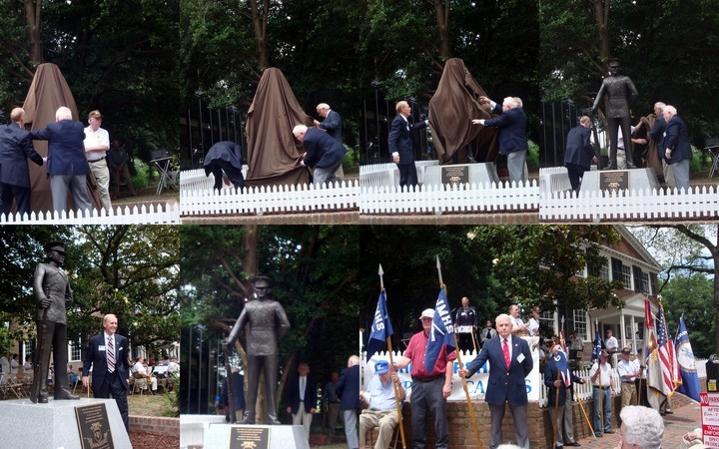 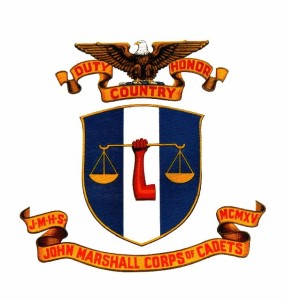