Friday, November 11, 2022 - 12:00 PM...Veterans Day, on the grounds of Hollywood Cemetery, honoring the memory of 76 fallen John Marshall Cadets who proudly served our country and remembering and giving thanks to all living veterans.  This will be an abbreviated ceremony intended for John Marshall alumni, but is open to the public.  There will be no featured speaker and the Band will not be in attendance.  Taps will be played.

Videos of Past Events
JM Alumni Band at Cadet Reunion 2014

For the most up-to-date band schedule, go HERE.

To see the most recent issue of the Guidon, click on image. The Guidon will continue to be mailed out in the Spring of each year around April 1. 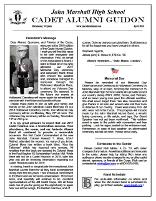 Military Education and High School Memories
Featured in a New Exhibition at the Virginia Historical Society
Richmond, VA—On Saturday, October 24, 2009, the Virginia Historical Society (VHS) opens the exhibition The John Marshall High School Corps of Cadets. Featuring more than one hundred items, the exhibition explores the history of military training as part of the education system in Virginia, focusing specifically on the John Marshall High School course and its cadet corps.  "People who participated in military programs should enjoy seeing details from John Marshall that will remind them of their own experiences," said Jeffrey Ruggles, exhibition curator and VHS curator of prints and photographs. "And visitors who never had the opportunity to join a cadet corps will see the rewarding aspects of a military education.  The fond memories and continued interest of cadet alumni prompted us to assemble this exhibition."
When John Marshall opened in 1909, it was the only public high school for white children who lived in the City of Richmond. The school's military program started in September 1915 and had more than 8,000 teenage boy members before its discontinuation in 1971. The cadet corps was created to improve school cohesion and behavior and to prepare young men for future military service. Cadet corps members made up about 50 percent of the school's population. Cadets went to class with other students, but wore uniforms and had daily drill practice with their company.  Twice a year the corps participated in marching competitions against area schools—which they often won—giving members a strong sense of pride. The Cadet Corps Band was its own company and usually led the corps on parade.  At times it also served as the band for the Richmond Light Infantry Blues, the well-known Richmond militia unit. The band marched in Herbert Hoover’s and Dwight Eisenhower's inaugural parades, in 1929 and 1953 respectively. "There were other military programs and corps units at schools in Richmond, and in Virginia, but there has never been anything like the John Marshall Corps of Cadets when it comes to military preparedness and discipline," said Richard Barrett, President of the John Marshall Cadet Alumni Association. "Everyone that came out of John Marshall, and especially the corps members, still feel a strong love for the school and the program, and everything they both stood for."

The exhibition features flags, pins, weaponry, medals, programs, postcards, and dozens of photographs from the VHS collection that were donated by corps members.  Well-known names, such as June Carter Cash, Frank McCarthy, Senator Harry Byrd, Jr., and Franklin Roosevelt, appear in the exhibition. Other military schools and programs from across Virginia are also represented, such as Hargrave Military Academy, Benedictine High School,  Fork Union Military Academy, and Webster Military Institute. In addition, there is a fourteen-minute video featuring music by the Cadet Corps Band and footage of the corps on parade, at drill presentations, and scenes of social life from the 1950s and 1960s.
The John Marshall Cadet Alumni Association is hosting an open house on Sunday, November 15, from 1:00–5:00 p.m., at the VHS for former students who are interested in seeing the exhibition. The event is free and open to the public and will feature a performance from the Alumni Band at 2:00 p.m.  The John Marshall High School Corps of Cadets is on display at the Society until April 11, 2010.  There is a gallery walk of the exhibition scheduled for noon on Wednesday, October 28.  "The cadet alumni I have spoken with look back on their experience as one of the highlights of their upbringing," Ruggles said. “The strong sense of belonging engendered a long-term commitment and appreciation for the school."
For more than 178 years, the Virginia Historical Society (VHS) has been the steward of our state—and often national—history.  Headquartered in Richmond, the VHS features award-winning exhibitions that are entertaining and educational for visitors of all ages.
428 North Boulevard, Richmond, Virginia 23220Mail: P.O. Box 7311, 23221-0311 | Phone: 804.358.4901 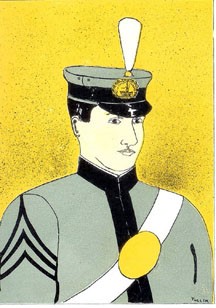