Do you have any great memories or remembrances of the Jayem Cadet Corps that you would like to share?
I'll bet you do!  Email them to us and they will be posted on this page!

THE GREAT REVEILLE ESCAPADE OF 1945

An exciting event took place after the Competitive Drill of May 1945.  It just so happened that after the cadets cleared the armory, a Virginia State Guard unit moved in for the weekend and encamped on the drill floor which was located on the second story.  One of our more enterprising cadet bandsmen decided that it would be exciting to sneak in after guardsmen had gone to sleep, blow reveille and then escape, of course.  Two other bandsmen and myself were recruited for this endeavor.  Around midnight, our leader parked his car near the corner of 8th and Marshall and we split up into two teams.  Myself and one bugler went to the entrance, slipped  in the front door of the armory, crept up the stairway, and stopped under the balcony where the entryway opened out into the main floor.  Our leader and the other bugler went in the entrance and slipped up the rear stairway to the main floor.  The general idea was, at a prearranged signal, to blow reveille in "stereo" and make tracks!  However, after assuring himself that the soldiers were asleep, the bugler with me jumped the gun, blew reveille and chaos erupted.
We all escaped down the stairways and out on the sidewalk, but some of the guardsmen were too close on us to make it to the car.  We ran north on 8th Street all the way to the old Howitzers Armory below Leigh Street, doubled back on 9th Street to Broad, and finally back on 8th towards the car.  There were some police hanging around in the vicinity of the car, but they were about ready to leave and we finally made our escape unscathed and unidentified.
And so another escapade joined the lore of the Corps of Cadets.

What’s the value of any look-back at history but to see our place in it, to take pride in being part of something old and grand.  Because we lived in such a unique time, John Marshall High School and especially its corps of cadets made a huge impact on my life and shaped my attitude about a lot of things, not the least of which was a great and enduring appreciation as to the value of friendship. I believe these friendships were forged in a very unique time that will probably never be duplicated.
We were born, raised, and attended public school in an era when economic times were hard. World War II affected our daily lives, and loyalty to neighborhoods, schools, and friends was a way of life. Even after 68 years, I can still easily identify the time when I set my goal of being a JMHS cadet.
In 1941, I lived on Third Avenue in Highland Park.  One of our neighbors, the Vermillions, had a grandson who lived with them, W. Bryan Stockdon. Bryan was First Captain of the JMHS Corps of Cadets, September 1941-February 1942 term. As an 11 year old, I was totally impressed with this young man resplendent in his uniform with all those stripes and vowed that someday I would be a John Marshall cadet. As somewhat of a postscript, my cadet training and ‘esprit de corps’ served me well when I later went through Marine Corps boot camp at Paris Island in 1948.

Remember when you were a cadet in the old John Marshall Cadet Corps?  What an arrogant bunch we were but we were the best and we knew it! There was no military organization in the country that could do "square- bashing" as good as we could. Remember the first day being assigned to one of six companies according to height?...not permitted to wear the uniform, but could wear the cadet shoes, no democratic rubber heel but leather with metal taps.

Marching, marching...always at attention or parade rest...saluting the "Ball" every day...finally your uniform arrives at the Specialty Shop or Green and Koegel's ...you're incorporated into your regular company ...preparing for inspection ...Blitz Cloth for cleaning brass on cross belts and 1903 rifles ...spit and polish for PM formation on Wednesdays when the cadet band really showed up ...back to the Gray's Armory from the drill field on a hot spring day and have to stand at parade rest (never rest) listening to the endless announcements and always five or six cadets passing out (we used to count them hitting the floor).

In the 1940's maybe up to 100 Army MP's lived in the Armory and were amazed at the precision of our Corps... ceremonial was not one of the strong points of the U. S. Army, that's for sure.

One thing is certain, there will never be another organization like ours...political correctness would certainly prevail. It's a new Virginia now.

Jack Treville, F Co. '55
Remembering The 1st Semester
"Those Were The Days"

On choosing to become a member of the Corps of Cadets and entering John Marshall High School as freshmen, a total life change was about to take place for us poor souls who had made that decision. From day one and lasting through the entire first semester, we were looked upon as sub- human by all upper class cadets. We were to them among the lowest form of life and subsequently the title given us reflected what we had become: RATS!
For the first few weeks we were separated from the rest of the Corps and assembled before school in the mornings, at noon drill periods, and after school for close order drill instruction. We were taught how to march, how to salute, shoulder a rifle, how to dress properly and even how to eat our lunch.
The cadet drill instructors from the company you had chosen to be assigned to were cynical and merciless. You were allowed to speak only when spoken to as they stood toe to toe and nose to nose with you, screaming at you just how utterly worthless you were. Billy Richardson and Ben Lewis from F Company were two of the best. They brought fear into our hearts. If I happened to see either of them during school in the halls or in the tunnel during class changes, my blood would run cold. Remembering them in that particular scenario fifty eight years later is a pretty good indication of how good they were. They demanded a full upper body brace with shoulders pulled back, chest pushed out and chin tucked to the maximum to touch the upper chest. The brace was maintained during all drill periods and the mid day meal. It would be a strict requirement that wouldn't end until the start of the spring semester.
Along with our daily training routine we were given items to commit to memory, among them, the twelve general orders for standing guard duty and the rather long worded Cadet prayer from the USMA at West Point. Memorizing them took some doing and initially my Spanish I and Biology I homework took a hit for awhile and my grades reflected the neglect.
Our initial training period eventually ended and we were placed into our companies, assigned to a platoon and a squad. The thrill of finally becoming an integral part of the company was worth all the pain and fear of those early training weeks. Although the brace was demanded and the harassment continued, I clearly remember a slight euphoric feeling of accomplishment as we (my band of Cadet brothers) marched to the music and the drum beat of our Cadet band.
As a member of their respective company, there was yet another item to be put to memory for the incoming Rat, the Company Yell. Composed in four or five line rhyming verses, the Yells were a form of peppy cheers and each company had its own versions passed down from earlier times. After dismissal from drill periods and certain other functions, each of the six companies would huddle up together and try to out shout each other with their Yells. Sometimes a meeting or National Guard class would be in progress when the Corps was dismissed in the Amory and the companies would still huddle together, but instead whisper their Yells.

Memories of The Cannon Ball 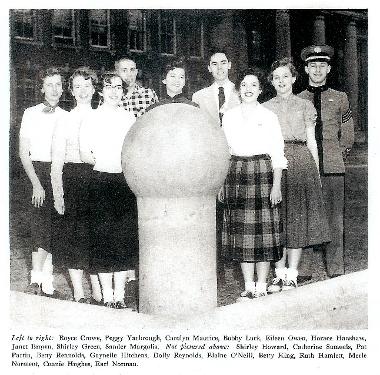 WHAT HAPPENED TO THE CANNON BALL(s)?

This article was prompted by a request made at the Annual Meeting. Members were asked if anyone had suggestions for articles for the May issue of the Guidon. Mr. Draucker, Co. B, suggested that some of the younger alumni might shed light on what happened to the cannon ball that was moved to the new John Marshall High School in 1961.
While going through Volume IV of Mr. Loughridge’s The History of The John Marshall Corps of Cadets-1915-1971, I found a copy of a photograph of a cannon ball after it had been moved in 1961 to the new school.
Jim Walthall’s memorabilia provided two newspaper clippings pertaining to the subject. One clipping was a 1961 letter to the editor questioning the whereabouts of the “cannon balls.” The other showed a cadet saluting a cannon ball at the new John Marshall High. Cadets were saluting cannon balls at the old John Marshall as early as 1920. Why? No one seems to know. We have been unable to find any written explanation.
While researching at the Virginia Historical Society in 2008, Phil Leveque, D Co. ’45, discovered that three cannon balls were brought from Constantinople (modern day Istanbul) by Commodore Jesse D. Elliot aboard the USS Constitution. The three cannon balls were delivered to Rockette’s Landing in Richmond in 1828 with instructions for them to be presented to the University of Virginia. They never got there.
It appears that Henry Moncure had them erected at his residence, which was located at 7th & Marshall Streets in 1833. Later, they were used to mark the boundaries of the Regimental Armory that was built in 1881. The Regimental Armory was destroyed by fire and replaced in 1914 by the Gray’s Armory.
The Corps’ most revered sentinel was a five-foot hatless granite figure. His weight has been estimated at approximately 1,200 pounds. (He is not going anywhere without assistance). He has guarded the entrance to the old Gray’s Armory, the lawn at the old school and most recently, the northwest corner of the drill field (Alumni Field) at the new school. (Oh, the tales that he could tell about the things he has seen, if only he could talk).
The whereabouts of our sentinel at the present time is unknown. He is missing. Gone AWOL. We would like to have him back. We might find another post for him. If there is anyone out there who may be able to shed some light as to where he might be found, please contact any of the Board members. 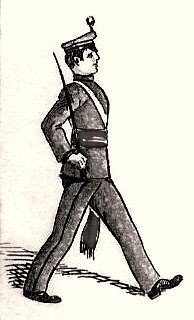