The Cadet Mackinaw as shown above being worn by The J.M. Corps of Cadets, was in use from the Fall of '46 through the Winter of '59 - '60; but the story associated with their procurement actually began 16 years prior.  In 1929 - 1930, under the leadership of Capt. James C. Anthony, The Corps began the acquisition and eventual use of an overcoat similar to the VMI style.  Today, very little is known about the procurement process associated with those overcoats and it's also not known if all cadets received them.  What is known, as evidenced by the picture shown here (at left), is that they were worn by at least the Band, the Staff, and certain Companies.  It's not known how long these overcoats were utilized but at some point they fell into disuse, probably due to deterioration and cost of replacement, being that the Great Depression lasted until the late 1930's.  Following the demise of the long overcoat, JM Cadets had no coats, rain-gear, or protection from the weather of any kind; nor did the Cadets at the other Richmond City High Schools including Thomas Jefferson, Maggie Walker, and Armstrong.  This situation lasted for years.

There was one single event that brought to focus the need for some sort of cadet coat.  On March 14, 1946, The John Marshall High School Cadet Corps lined the driveway leading to the Virginia State Capitol in Richmond, anticipating the arrival of General Eisenhower and Winston Churchill where Churchill would address the Virginia State Legislature. It was cold and very rainy and the event was captured by British Movie Tone News and other camera crews from around the world [Go HERE for video].  Needless to say, seeing our cadets without coats of any kind and getting drenched must have been somewhat embarrassing to the city leaders and the school, because the creation of a Cadet Overcoat Fund soon followed.  A picture of the JM Cadets standing in the pouring rain was used in all formal notices printed and/or published by the Richmond News Leader as they promptly announced the newly established Overcoat Fund and agreed to accept and hold all funds.  The first formal notice appeared as a letter dated April 8, 1946 (shown at left) and a full page notice followed on April 19. (shown at left, below).  The fund was established as a means to acquire coats for all the cadets in the Richmond Public School System with a monetary goal of $10,000.  Raising the funds necessary for the procurement of coats became a priority of the newly formed John Marshall Cadet Alumni Association, who were considered the primary sponsor and driving force behind the Cadet Overcoat Fund.  The Overcoat Committee was led by Mr. Clyde H. Radcliffe, Jr., Chairman, and Judge L. McCarthy Downs, Vice Chairman.  Both were members of the Cadet Alumni Association.  In less than one month, on May 15 to be exact, it was announced that the fund had far exceeded the original goal, and that $14,985.48 had been collected.

It appears that the raising of funds might have been easier than the actual selection of the overcoat style. As early as April 16, there had been an offer from the Virginia State Guard to provide surplus mackinaws, but this is not what the Overcoat Committee really wanted.  Maj. James C. Anthony, at that time president of the Alumni Association and employed as the Director of Public Safety, City of Richmond, wanted a coat that was similar to, but of better quality than that secured back in '29-'30.   On July 22, he furnished one of the old coats to the United States Rubber Company, the original manufacturers, in order to secure a price.   On August 14, it was announced at the Alumni Board of Directors and Committee Chairmen's meeting that the sample coat ordered by Maj. Anthony had been received, examined, and rejected.  An effort was then made to have the VMI style overcoat made by the State Penitentiary as a public service and they did agree, but at a price of $27 each.  On September 4, the chairman, Mr. Clyde Ratcliffe, Jr., announced that he could obtain 175 of these VMI style coats from the State Penitentiary in time for the JM-TJ football game.

It was now the start of the new school year (Fall 1946) and Maj. Anthony had replaced Col. Earl L. Brown as Commandant. He was more determined then ever to select a good serviceable coat for his cadets.  On October 14, 1946, Maj. Anthony makes a decision and writes Col. Edwin P. Conquest, then President of the Cadet Alumni Association.  He states: "In view of the unsettled woolen market, I deem it unwise to purchase the long coat as originally planned for the 4 Richmond Public High School's Corps of Cadets, and feel at this time we should obtain without cost to our cadets, the Virginia State Guard cadet grey mackinaw [from surplus].  I have examined and approve same as a desireable addition to the cadet uniform of the Corps of Cadets.  If purchased from the Fund created for the purpose, it is understood these mackinaws will be the property of the respective schools, and will be issued to the cadets as are books or other school owned property, to be returned cleaned at the end of each winter for storage as prescribed by the Commandant".  A

John Marshall Cadet Alumni Board of Directors and Committee Chairmen's meeting was held at 5:00 PM on the same date, also in attendance were the Commandants from JM, TJ, Armstrong, and Maggie Walker.  Maj. Anthony's recommendation was discussed and a final letter (shown at left) was prepared by the Alumni Association and sent to the School Board enclosing a check in the amount of $5,449.50 to cover the purchase of 1,557 mackinaws at the agreed upon price of $3.50 each.  The letter further stated "Maj. James C. Anthony, Commandant of the John Marshall H.S., Col. Catlin Tyler, Commandant of the Thomas Jefferson H.S., Mr. H.S. Crawford, Commandant of the Armstrong H.S., and Mr. Kearney C. Manning, Commandant of the Maggie Walker H.S., have all written us that they have inspected the overcoats which were formerly used by the Virginia State Guard, and that these overcoats are suitable and satisfactory to become a part of the uniform of the members of their respective Cadet Corps".  [Signed by Edwin P. Conquest, President].  At long last, the Cadets had their "new" overcoats. 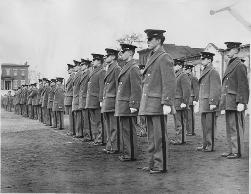 JM Cadets wearing the newly acquired mackinaws.  The Corps is shown on the Drill Field, Nov. 21, 1946. 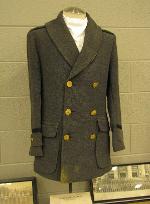 The only surviving mackinaw known as of 2015.  In the collection of Allen Lane, B Co. 1958-1961. [Retrieved by him from the floor of Grays Armory in 1960 as they were being readied for disposal]. The last cadet to wear this mackinaw was Charles Johnson, Capt. of B Co. in Fall 1957; as evidenced by a tag sewn in the left pocket. 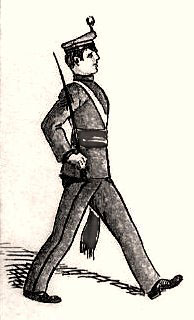